I’ll be honest with you. I’ve never really considered grapefruit rinds as anything but garbage…or, more recently, compost material. I’ve lumped them right in there with coffee grounds and egg shells. But recently I learned something that set my whole grapefruit world-view on its head. Oh, they’ll still end up in the compost…but perhaps not always anymore.

A little something about my Greek Yaya. I think it will help you understand the great surprise I had a few days ago when my mom told me something of her I hadn’t known before. 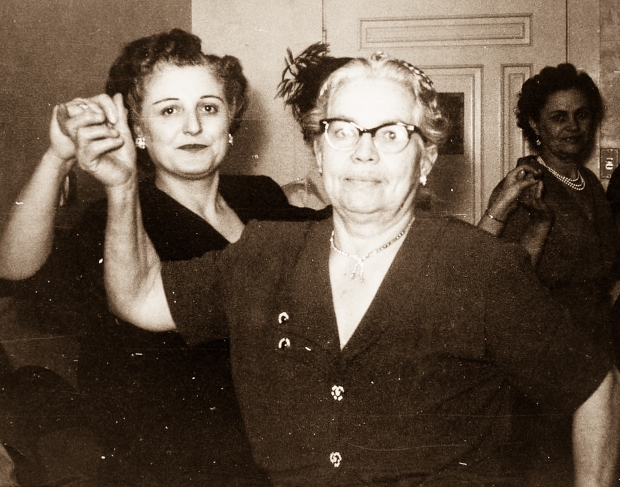 Yaya was the matriarch of the family, and the only female in the house in which my dad and his three brothers grew up. By the time I met her, she was already in her late-60′s, early 70′s? I’m guessing here, because, being only ten-years-old myself, she looked pretty darned old! Besides her husband, our Papou, who was at least fifteen years her senior, she was by far the oldest person in my world. I wondered even then though, how does a person so old manage to be so full of life? So young? She was exuberant and outspoken. She knew what she wanted and generally just how to get it. She laughed big. She had a big heart, full of praise. That was Yaya. She always wore dresses, always! and they were always dark. She wore support hose with elastic tops that sometimes rolled down around her legs. And big black shoes. Her hair, which must have been very long, was always twirled into braided buns. (Her hair held an endless fascination for me! The thin ends of those long braids reminded me of an artist’s paint brush, dipped in yellow. They weren’t blond. They were a true and very beautiful lemon yellow! But the rest of her hair, the most angelic white! I always secretly wished to see her hair down around her shoulders, but I never did.) Yaya was, I guess you’d have to say, squat. Matronly. Big-bosomed. And she gave the most amazing hugs! Like a great feather bed with arms.  And she never hugged without at the same time cooing (or sometimes even shrieking) her delight in us! My brother Don and I would run up and down her staircase and slide down the bannister, and this made her so happy! She loved the loud noises of children!  “No make it them be quiet – is nice!” she would tell our parents.  Her Greek was vastly better than her English, but even so, she knew how to be funny in her second language, and she often was. Incense perpetually burned at a small altar in her bedroom, beneath the icons of patron saints and Jesus.  It was partly for that reason that her house always smelled so very different from our own. But it was also the bread baking, the homey “soupas” and “cassa-row-les” and other foods, quite exotic to me at the time. Much of what I first saw of Yaya was in the context of her kitchen, and as mother to my dad who adored her. I never considered who her friends were, or what she might do when she wasn’t with us (besides cook all day and pray – both of which were intriguing mysterious to me back then.)

So, do you now have a little picture of Yaya? Then can you imagine her sitting at the round wooden table in her parlor? With her lady friends from the Greek Orthodox Church? And on the table, plates of candied grapefruit rinds? And kourabiethes (a crescent-shaped butter cookie)?  And stiff, dark, thick coffee in short cups? And OUZO, that licorice-flavored liqueur, in thimble-sized glasses? And the ladies yakking loudly and laughing! Ha! I loved this new expanded picture of my Yaya!

The more I contemplated it, the surer I became that I simply had to find out what candied grapefruit rinds and ouzo taste like in the same mouthful. And that’s what brings me here, to this place where I’m ready to share with you some food.
(See following post – Kourabiethes cookie May 9.)