If you’ve been following along, you know that for me this summer has not been about maintaining a steady, even pace. For at least four weeks, it almost seemed as though you’d need to poke me to know I was still alive. : ) There were whole days in fact when I could do little but stare out a window. Then the pace, following surgery, suddenly changed. Daily, for the next three weeks, I was shot out of a cannon.  My youngest brother was marrying his sweet love at our house (!) and I had everything yet to do! Inside, outside, all around the house! I’m delighted to say that they were married this past Saturday…and everything was . just . plain . lovely ! Sixty or so of the nicest people, a beautiful and moving ceremony, a stringed trio,  a veritable feast, and so much love it was contagious. Quite a few of us left euphoric…but no one more so than my brother and his new wife.

Health, happiness and a long, sweet life together, Jeem and Darlyn!

Today I think I may be hitting one of the gears I missed between the two extremes of summer. I am back to humming in my kitchen, and happy to be back in your company again. Expect me to be keeping it in third gear for the rest of summer, with a steady stream of food-stuff I’ll be wanting to share.

But I begin by emptying my refrigerator. I have a few too many red bell peppers and oodles of feta. I have farro (that wonderful nutty Italian grain tasting something like barley, but actually an old-world wheat.) And oregano (passed down from our Greek Yaya) is spilling out of the herb garden. So let’s stuff ourselves some peppers! 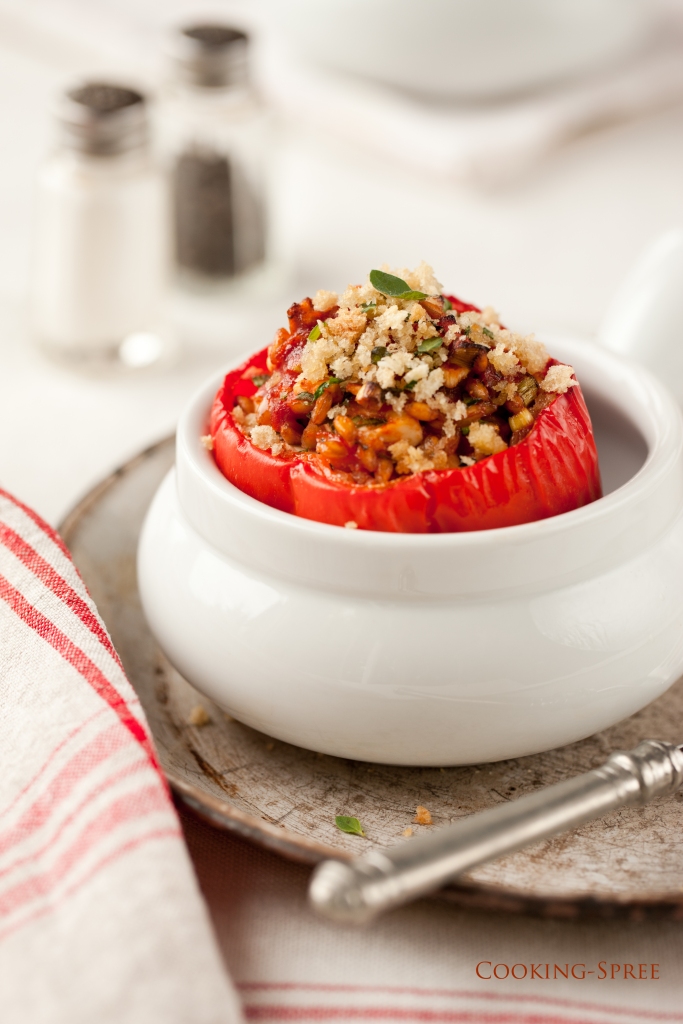 These can be served as a side-dish or as the center of a vegetarian meal. Perhaps with green salad or fresh green beans drizzled with olive oil, sprinkled with coarse salt and thin strips of fragrant, fresh basil.

(If you don’t have or can’t find farro – it is worth the hunt – substitute with brown or white rice  – or barley – or that little pasta, orzo.)

Garnish: toasted (& herbed) bread crumbs for the peppers once they come out of the oven (see NOTE)

Set a large pot of water to boiling. Add 1 tablespoon salt. Cut off the top 1/2 inch of the peppers (reserving these tops for later) and remove and discard the cores and seeds. Submerge the peppers in the boiling water and boil for about 3 minutes – peppers will just be starting to soften. With slotted spoon, remove the peppers to a paper towel to cool and dry. (Place open-side up to prevent over-softening.) No need to discard the cooking water.

To the boiling water add one cup farro and cook for about 15 minutes or until done al dente. (Depending on the type of farro you use, cooking times can vary by quite a bit.)

Can we all just agree that we have very little interest in hearing more abdominal surgery or recovery-complication stories? Can we agree too that surgical scars really aren’t all that attractive, and most aren’t even very impressive, so they’re probably best kept under wraps? Can we all agree that what brings us here is either the necessity of putting full plates on the table, or the sheer Love of doing so? Oh good, thank you! You don’t know how happy that makes me!

For the remainder of the summer and probably through September, I’m focusing my food-related attention on all the fresh, eye-poppingly colorful bounty in farmers’ markets or – if we’re so lucky – our own overflowing gardens.  And, just to be a tiny bit contrary, I’m beginning with Z.

A dear aunt of ours – Maureen –  was an artist.  She was one of those rare individuals who created beauty out of  whatever  materials her hands touched.  She painted hundreds of beautiful canvases; she was a master gardener whose green thumbs astounded; and she was a pastry chef whose desserts had to have been divinely inspired (or maybe Maureen was always an angel.)   I think she’d be surprised to know though, out of all the beautiful and spectacular things she left us,  this humble little vegetable pancake is one of the things I remember most fondly. Somehow, it just takes like home.

Tonight it’s an easy dinner for us. A short stack of these lacy little cakes, juicy slices of heirloom tomatoes with coarse salt and olive oil, a Greek flatbread with olives and mint, and a little leftover grilled halibut.

I never heard our Greek Ya-ya refer to these as anything. I doubt that she ever tasted them.  But I love to imagine what she’d call them if she had. I think something like: zucchini pana-cake-ya’s. Maureen simply called them zucchini patties.

zucchini pancakes with mint and feta

(or what Ya-ya would have said)