On bleak and chilly days, before the Spring, and before the Spring-runs of salmon – which is generally when we’re craving it most – we buy a frozen salmon fillet and this is one of our favorite ways to prepare it.  (The salmon remains tender, succulent, moist – if you hadn’t bought it yourself, you wouldn’t know it was frozen.) This dish is savory, sour-sweet (thanks to the tamarind),  warmly and mildly spicy, and coconut-milk-creamy…and, as a bonus, it’s an incredibly healthy meal.

A note on the SPICES:  (I like to use whole seeds when I can, and dry-roasting them brings out their “sweetness” and adds another dimension of flavor to a dish. Besides that, spices you buy already-ground have started to lose some of their potency by the time they make it to your spice cupboard. But if you don’t want to make the purchase and you already have the ground spices on hand, by all means, simply cut in half the quantity of seeds specified below as your guide.)

(this should serve at least 4) 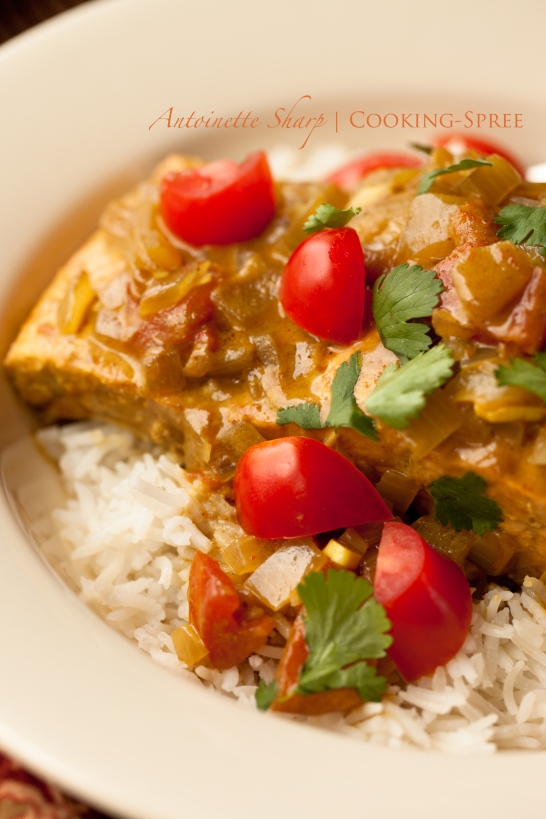 Drop the coriander, cumin and fennel seeds, along with the peppercorns, into a small skillet, using no oil. Place over medium heat and toast the seeds & peppercorns until seeds have begun to release their aroma and have turned a toasty brown, stirring or shaking the pan often. Remove the skillet from the heat and allow to cool for just a minute then grind finely with mortar and pestle or in a spice grinder.

Measure out the other spices and have them ready to add all at once.

Cut the tomatoes in half crosswise – squeeze and shake over sink to release most of their seeds. Then chop.

END_OF_DOCUMENT_TOKEN_TO_BE_REPLACED

bread for tomorrow – the no-knead loaf

Did you know that ¼ teaspoon of yeast can rise a loaf’s-worth of dough just as well as a tablespoon? It’s true. It will simply take longer for it to do so. But there’s a real beauty in that. The old adage good things take time applies. With each extra hour the yeast grows, it adds incredibly to the flavor of the finished loaf. So, though some recipes for home-baked bread will have you adding nearly a tablespoon of yeast, and sugar for it to feast and grow quickly on, and have you rising the dough in a warm place, that’s meant for your convenience and to hurry the process. If you slow it down, you’ll love what happens!

This may be the easiest – and possibly one of the most delicious – breads you’ll ever bake. Start it today, finish it tomorrow, and there will be curtain calls and encores in your future! Do I exaggerate? Occasionally, I have, yes. But here, no.

For full-effect, a true Dutch oven is required f or this. Cast iron is best because it creates its own highly-conductive little furnace to bake the bread in. Higher-end brands like Le Creuset or Staub are lovely and come in many colors. But just as effective here are non-enameled (lidded) cast iron pots that you might see hanging over a campfire. The latter are inexpensive but require a bit more care in the cleaning, curing and preventing of rust. Always nice to have options though.

I’m sorry to repeat myself, but a digital kitchen scale makes this process so much simpler too, and with fewer things to clean up after. (See preceding posts if you haven’t already.)

This method (ingenious really) was first developed and introduced to us several years back by Jim Lahey of Sullivan Street Bakery in New York City. Since its introduction, this No-Knead method has rather revolutionized home bread-baking. Without terrifically expensive ovens (the kind of which are almost never seen in home kitchens), this bread’s crust wasn’t reproducible at home before. You can see for yourself though, loaves reminiscent of old-world bakeries can now emerge steamy and fragrant from our own rather ordinary ovens.The secret lies in the steam that’s created and contained within the Dutch oven as the bread bakes. 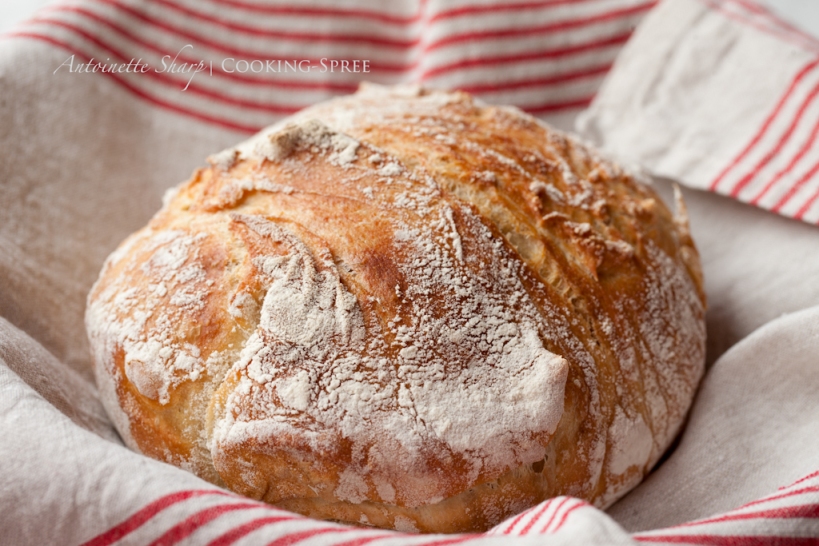 This bread will cost you the equivalent of 3 cups of good-quality flour. We won’t calculate the cost of ¼ teaspoon of yeast or a spoon of salt. Let’s just say this gorgeous bread costs less than a cup of coffee or tea (even a very bad cup.)

and you are the artist!

a NOTE on the weight measurements, this primarily for the readers in the States who are as yet not as familiar as we will one day be with metrics. One beautiful thing about the metric system is that grams and mL’s are virtually interchangeable. In other words 100 mL’s of liquid will weigh 100 grams. Don’t you love that? That makes it possible to weigh out water measurements instead of the more approximate method of filling a glass measure where “a tad above-the line, below the line, eye-level” all makes a difference. Weighing is exact, every time.  (If you have a scale, it will likely convert US measurements to metric with a button-push, but just fyi 430 grams =  15.2 ounces.)

In a bowl, mix the flour, yeast and salt. Stir in the water to blend. If using a scale, place bowl on scale and zero it out. Add 430 grams flour. Add yeast and measure out salt. Zero the scale, and add 390 mL (or grams) of water. Mix loosely. (It will finish the process of blending as it sits.) What you’ll have will be a bit wet, shaggy and messy-looking. Cover bowl with a tea towel and allow to rest (and grow!) for 12 to 24 hours. (If you choose a cooler place, the process will likely take 18 to 24 hours. Room temperature, more like 12 hours.) When the dough is dotted with bubbles and very alive-looking, you’re ready for the next step.

Generously flour a work surface. Dump the contents of the bowl out onto it.

See all the strands of gluten that have formed while you’ve ignored your dough? This is what will create pockets to contain the gas.

No need to knead, but simply fold the dough over on itself several times. Cover it with a clean towel and allow it to rest for 15 minutes. (Dough that rests like this is much more workable.)

(This next step feels so good!) Using only as much flour as needed to prevent the dough from sticking to your fingers, shape the dough as follows:

Fold in thirds (as if you were folding a letter for an envelope, one fold, then another.) Rotate the loaf, then fold each longer end in again. (You’ve made roughly a square shape with rounded corners.) What you have facing you is the seam that will open later, upon the final rise in the oven.

After the first two folds

After the last two folds. Ready to rise.

Lie another towel on your counter and cover with a generous amount of flour, wheat bran or fine cornmeal and then place the dough on it, seam-side down. Be sure the flour extends beyond the borders of the bread as it will be growing. The reason for the generous amount of flour is that you do NOT want the bread sticking to the towel when you go to invert it into a hot Dutch oven.  Dust the dough with a little more flour then cover with a tea towel and allow to rise about 2 hours. In these two hours the bread will have more than doubled its size.  END_OF_DOCUMENT_TOKEN_TO_BE_REPLACED