we all bring something to the table. what are our gifts? what of ourselves do we decide to grow and then share? what love language do we speak? do we learn to speak another’s? how well do we listen?

my husband learned years ago that i love flowers. in the beginning he would order elaborate flower arrangements (full to overflowing) and have them delivered to the door. then, somewhere along the line, he learned i like simple, and all of one thing. and now, he brings me bundles wrapped in paper, wound with string, carried in his own man arms. and sometimes, after days away, blooms are there, welcoming me home again.

if you’ve been with me awhile, you’ve heard of my fear of pie. (more truly, it was fear of a colossal-y failed crust.) i’ve done truly brave things in my life (i’ll even cop to a “reckless” act or two) but pie crust? why and how this fear (irrational to begin with) grew to be such a beast, you might guess. but for years i steered clear of the rolling pin. then, only fairly recently, i decided to stand toe to toe with that tiger, stare unflinching into his golden eyes.

that tiger walks beside me now, purring like a kitten. and finally (and this is reason enough to take on a tiger) i can make my love his apple pie.

I’ve shared my recipe for a tart shell in an earlier post. (see French Lemon Tart if you want to be tempted!) I’ll include the crust recipe here too, at the end of the post. I’d like to be humble about this, but after years of being humble, to finally be proud seems like something worthy of sharing. So here’s the un-softened, un-humble truth. This crust is   a.w.e.s.o.m.e.

A word about the filling: I grew up eating and loving rhubarb. To me, it’s a thing of spring. So as a base for this pie is a thick rhubarb “compote” of sorts – the liquid cooked out of it and nothing but the essence of the fruit remaining, lightly sweetened, imbued with the scented seeds from a vanilla pod and touched with a hint of cardamon. Apples, rolled in melted butter and brown sugar twirl across the top. Serve as is, warm from the oven, with or without ice-cream or crème fraîche. Or serve it chilled. It’s not too sweet for brunch or tea.

Wash the rhubarb stalks. Split in half lengthwise, then cut into pieces about 1/2-inch or smaller. Put in a medium-size heavy pot. Split the piece of vanilla bean in half lengthwise and scrape out the seeds, adding both the pod and seeds to the pot. Drop in the brown sugar and cardamom.

Place the lid on the pot and cook over low heat for 15 minutes or until saucy. (No water in this compote – the low heat will encourage the rhubarb to release its own moisture.) 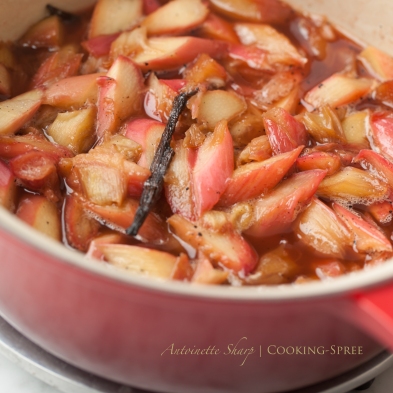 END_OF_DOCUMENT_TOKEN_TO_BE_REPLACED

I know you show up here mostly because you like food and because you expect that I’ll talk about food. You don’t come to hear my confessions. Yet several times in recent months I’ve subjected you to them. I sincerely apologize, I do, but I guess I’m not quite done, because here comes another: I have had a lifelong Fear of Pie. Well, it’s not the pie I fear, because that would be silly. Pie, especially fruit pie, is my favorite dessert. It’s the making of pie I’ve feared. You can trust me with the innards of any pie, I think, but the crust? I cringe. My hands go cold and clammy. My mouth goes dry.

I’ve lived with this phobia my entire adult life. I’ve spoken of it here before, and eating a bit of humble pie, I offered a compromise, a more rustic version of pie, the galette. But I’d vowed this year to meet pie head on.

For a very special girl’s 9th birthday, my gift was a series of baking dates together. Sici and I laid them all out, from most basic to — you guessed it — most feared. Kids, as you’ve no doubt experienced, are far more perceptive than we sometimes pretend, and they’re quite adept at picking up our true feelings no matter what words we speak. Point is, I think she knows. I swear, hand on heart, I’ve so not wanted to contaminate another generation with pie fear! But this girl wasn’t about to be contaminated or deterred. She’s a trooper, an adventurer, a girl with a can-do attitude, and I’m taking a lesson from her on this one! With our pie date looming, it was time I practiced.

You’re right, of course. Why would you take a lesson from me on pie crust? Why read another word? You’ve got a point. But here’s my thinking: I’ve been doing quite a bit of research on the subject. A number of sources claim they hold the secret for the perfect pie dough, and I’m not saying they don’t,  but I’ve remained unconvinced.

If you’ve ever read Cook’s Illustrated, you know that they’re renowned for making hundreds of versions of a recipe in their test kitchens in order to arrive at “perfection.” They’ll lay out a case, sometimes quite scientific, and in this instance, I was looking for science — hard scientific evidence, something to bring me back to the Age of Reason. I won’t lay it all out here, because I actually do have a life apart from this and you do too – but if you’re interested, you may be able to  locate a copy of the article Foolproof Pie Dough, published September, 2010.  I’ll give you the recipe here, but the case they made is brilliant and the article very interesting if you’re so inclined.

In brief, the secrets are three:

I summoned my inner-Sici and made the pie dough yesterday. It wasn’t picture-perfect, but everything else about it was. It was flaky, tender, flavorful. I did it! I’m still basking in euphoria.

(for one 9-inch double-crust pie)

1. Process 1½ cups of flour (7½ ounces), the salt and sugar in food processor until combined, two one-second pulses. Add butter and shortening all at once and process until homogenous dough just starts to collect in uneven clumps, about 15 seconds. (All the flour will be coated and the texture will resemble cottage cheese. Some very small pieces of butter will remain.) Scrape the bowl with a plastic scraper, evenly distributing the mixture around the blade. Add the remaining cup (5 ounces) of flour and pulse until the mixture is evenly distributed around the blade and the mass of dough is broken up, 4 to 6 quick pulses. Empty the mixture into an empty bowl.

2. Sprinkle vodka and water over the mixture. With a rubber spatula, use a folding motion to incorporate the liquid, then press down on the dough until it’s slightly tacky and adheres together. Divide the dough into two equal portions, roll into balls and then flatten each into a 4-inch disk. Wrap in plastic wrap and refrigerate for at least 45 minutes, or up to 2 days. (Dough may also be frozen, then thawed for later use.)

3. Adjust the oven rack to the lowest position and place a rimmed baking sheet on the rack. Preheat the oven to 400°F.

Remove the dough from the refrigerator and roll out on a generously floured board (using up to ¼ cup of flour as needed) into a 12-inch circle about one-eighth of an inch thick. Roll the dough loosely around the rolling pin and unroll into the 9-inch pie plate, leaving at least 1-inch overhang all around. Working around the circumference, ease the dough into the pie plate by gently lifting the edge of the dough with one hand while pressing into plate bottom with the other hand. Refrigerate for 15 minutes.

5. Remove from the refrigerator and line the crust with foil. Fill with pie weights, or pennies. (This keeps the crust from shrinking.) Bake on the rimmed cookie sheet for 15 minutes. Remove the foil with the weights, rotate the plate in the oven and bake for 5 to 10 additional minutes, until the crust is golden brown and crisp. Remove from the oven and set on a rack to cool completely before filling. (And if you, like me, are new to this pie-crust-baking thing, allow the room to fill with appreciative applause – be sure to add your own.)

Many pumpkin pie recipes call for pumpkin pie spice. Why buy a jar of pumpkin pie spice, use it once or twice between November and December and then store it away to use again the next year? At that rate, a bottle will last you at least half a decade. I blend my own with the spices I already have on hand and that are replenished fairly often. Nothing stale in this pie! (If you’ll make more than one pie this season, you may want to double the recipe. If you’ve got someone around who appreciates this sort of thing, here’s an idea – take the remaining pumpkin puree, the leftover pumpkin pie spice, add vanilla ice-cream or frozen yogurt and milk, whir it up in your blender, top with a dash of nutmeg and insert 2 straws.) 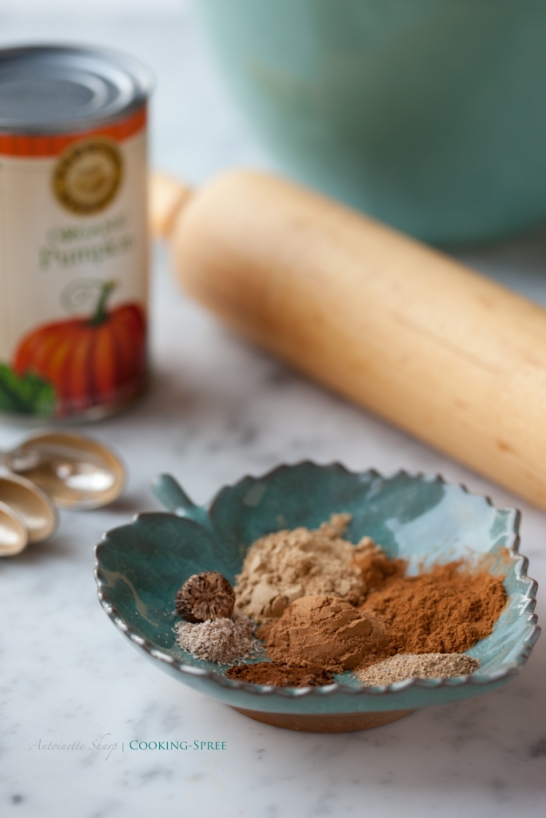 We’ve enjoyed this pie every Thanksgiving for years. Mom would often bring the pumpkin custard pie, and I’d make the chiffon. But (as I’ve already made quite clear) I didn’t do pastry crusts. So this pie always ended up in an alspice-laced graham cracker crust, which though still quite tasty, always left me feeling like I was cheating.

Garnish: 1 cup heavy cream, whipped with a wee bit of confections sugar and a small glug of vanilla, and sprinkled with a dash of freshly-grated nutmeg

END_OF_DOCUMENT_TOKEN_TO_BE_REPLACED

I had a bunch of fresh strawberries sitting on an old plate in a north window this morning as the sun came up. Dawnberries, I thought. And of course I had to bring my camera to where they sat. I can rarely leave anything this beautiful alone. The joy for me in cooking starts here, with beautiful fruit and vegetable shapes and colors. How shadows accentuate their plumpness. How water  makes their washed surfaces glisten.  How creases and dimples and stems and seeds tell the story of how they grew. What beauty crosses our paths in the ordinary, everyday act of putting a meal on the table!

For the dough, enough to make two 8-inch galettes:

Stir the sour cream and 1/3 cup ice water together in a small bowl. Put the flour, cornmeal, sugar and salt into the bowl of a food processor fitted with the metal blade. Pulse to blend. Drop the butter pieces into the processor bowl and pulse 8 to 10 times, or until you have a consistency ranging from bread crumbs to pea-size pieces. With the machine running, pour the sour cream and water mixture through the feed tube and combine until the dough forms soft curds. (This will take just a short moment. You don’t want to over-mix, but you probably already knew that.)

Remove the dough from the processor and, separating it into two pieces, quickly shape each into a ball and then flatten to a disc. Wrap each separately in plastic and chill for at least 2 hours. (Alternately, put in the freezer for about 15 minutes.)

Remove from the refrigerator and with a light dusting of flour on your work surface, roll the disc into an 11-inch circle. (You may need to lift and add several light dustings of flour since the dough is very soft, and will roll out very thin.)

Storage of galette dough:  If you decide to only make one galette at a time, the remaining dough can stay in the refrigerator for a couple days; or, with parchment paper between them and wrapped air-tight, they can stay in the freezer for up to a month.