Installment 2 in the series – we can feed another…

My very good friend Amit was born and raised in Delhi, India. He tells me  how much time he would spend outdoors as a boy, running long distances, playing hard with his friends and his brothers, from morning until the hot sun was nearly down. Here he is, on the left, with his mother Anjana and his middle brother Moni, resting in a field of nasturiums at the end of a long day of play. 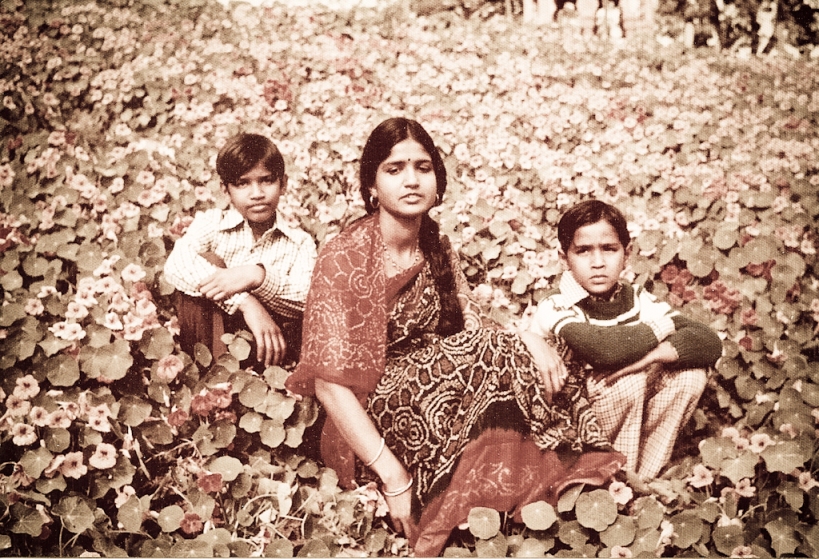 But something else was happening while Amit was growing up a boy in India. He was paying close attention to what his mother was doing in the kitchen. I know, because to eat at Amit’s house today is a treat, a sumptuous, sensuous, exotic and deeply satisfying treat! Even the simplest of meals feels like a feast at Amit’s house. He moves around his kitchen with ease and a deep but relaxed concentration, spooning spices from their metal tin, peeling and finely slicing ginger, roasting seeds in a pan on the stove. It takes but a few minutes of watching him at work in the kitchen and smelling the aromas rising before you know that the meal you’re about to be served is well on its way towards being amazing.

I told Amit that spree was doing a series on beans and rice dishes and the reasons why. (See rice & beans.) I asked if he’d share something his mother had cooked while he was growing up – something he’d loved then and brought with him when he moved to the States. He readily volunteered today’s recipe.

As often happens, we pick up the recipes of our parents and adapt them to our changing tastes and ideas about food and what we expect from it. Amit has made a couple changes to the recipe below, but we have first his mother Anjana to thank. This was a dish she was eating growing up a girl in India (seen here with her brother) –  long  before it came to be one of Amit’s very favorite dishes.

A pressure cooker was used for this recipe. It makes very short work of cooking with dried beans, and cooking your own dried beans from scratch is always a more flavorful alternative to canned.

No Pressure Cooker?  – it can also be made using a simple soup pot,  though it will take somewhat longer…or, if you’re in need of getting dinner on the table a bit faster, canned beans (likely pinto) would be a good option. Keep in mind though that cooking the beans with these wonderful spices really is the secret behind a fabulous dish of beans!

See bottom of post for serving suggestions, which include rice and raita (an Indian yogurt sauce)

NOTE:  You can use a variety of red beans for this recipe: pinto, Anasazi, Borlotti or any other of the “cranberry” beans. You could also use kidney, but they are a bit less “creamy” than others just named, and a bit gummier too.

Cut long thin (longitudinal) strips from the ginger. Add peanut oil to the pressure cooker (or soup pot) on medium or medium-low heat. Add cumin seeds. Amit says to fry until they “chit-chit”  which is the sound they’ll make as they approach doneness and are dancing around the bottom of the pan. Turns out, that’s a pretty good guide!  Once the cumin has begun to chit-chit, add the julienned ginger and fry until it’s turned a light brown.

Add the diced tomatoes. (I’ve only had this recipe a very short time, and already I’m making my own little changes. I almost always like to add to a dish that has cooked tomatoes, some freshly-cut ones towards the end so that their beautiful color and brightness is present. Therefore, I reserved a 4th medium tomato for that purpose here, cooking for only 2 minutes or less when the dish was nearly ready to serve.) Add the spices – turmeric, garam masala and coriander. Saute for 3 to 5 minutes.

(You will not believe the aromas filling your kitchen! Exquisite I tell you!)

Add the beans along with 2½ cups of water. (This will create a stew-like consistency. If you’d prefer something a bit soupier, you can add 3 cups of water instead. Turns out that I needed 3.) Add also the whole cloves at this time. Bring the pressure cooker to full pressure and then cook for 15 minutes.

(OK, here’s where a bean dish can go terribly wrong. : ) I cooked for 15 minutes and sampled a couple beans at that time. Not exactly rock-like. Back to the stove. Cooked an additional 7 minutes, figuring they needed at least half again as much time as they were originally given. In the end, my beans required a full 25 – 27 minutes in the pressure cooker. I’ve included a note at the bottom of the post that helps explain. I’d advise that you not take it for granted that your beans will be finished in 15 minutes – though they COULD be!)

Cool down the pressure cooker – then put it back on the burner on medium heat. Add the tamarind paste and stir to mix thoroughly. Add salt to taste.  (Be sure NOT to add salt to un-cooked beans! Their tough little skins will never soften if you do!)  Heat thoroughly, then remove from the burner and allow it to sit with the lid on while you prepare the rice. (Or keep warm on the lowest possible setting on your stove.)

This bean dish goes beautifully atop or alongside white or brown basmati rice or your favorite pilaf. Garnish with torn cilantro and sliced green onions.

Also very delicious served with Raita – in fact I consider it a must. It’s just the right amount of cool and fresh to balance the deep aromas and warmth.

Amit also suggests a salad of kale, pomegranate seeds and apple slices, tossed in a dressing of olive oil, fresh lime juice and salt. Allow the kale to sit for a while in the dressing in order to soften and for the various flavors to marry.

A few notes on beans:

END_OF_DOCUMENT_TOKEN_TO_BE_REPLACED

a bowl of irony & a jar of sunlight

Spree’s been down with a stomach bug – blech! The doctor has called for bland. For the last several days, no appetite at all. My husband’s gone to the store (twice) to fill my wish list – and then, not meaning to be ungrateful – I turn my nose up. How in the world does spree do bland? What an irony!

Put clarified butter (Ghee, in India) into a heavy pot. Add cumin, fennel and coriander seeds and toast over medium-low heat until (as my friend from India says) “they go chit chit,” which is to say they crackle and get medium-toasty brown. Add the rice, salt and stir to coat with butter. Add your water and bring to boil. Stir once. Reduce heat to simmer for 18 minutes. (Don’t peek.) Turn heat off and allow rice to sit undisturbed for 5 minutes. Fluff with a fork, and serve with something colorful and savory…if you can. (But even unaccompanied or unadored, it satisfies.) A sprinkling of chopped cilantro over top, nice!

A Jar of Sunlight – Clarified Butter

Butter is a combination of butter fat, milk solids and water. Clarifying removes the water and milk solids, leaving pure buttery goodness and elevating the smoking point. With clarified butter, you can now turn up the heat without risk of smoking up your kitchen or blackening your lovely meal plan. It has an absolutely wonderful aroma and delicately-toasty taste. It keeps well in the refrigerator for at least a month. (Some grocery stores will sell ghee in the refrigerated section.)

a jar of sunlight

END_OF_DOCUMENT_TOKEN_TO_BE_REPLACED

Once salmon season has finally arrived, this is one of our very favorite ways of enjoying it! It’s anything but ordinary, it’s easy, it’s memorable and it’s positively delicious. It all starts with the rub, a collection of whole spices dry-roasted, then ground. I know the list of ingredients may give the appearance of complicated and time-consuming – but the rub will take you about 15 minutes to prepare, and likely last you all summer and maybe months beyond. The rest of the dish is a snap!  You like salmon? You will love this! (You might want to keep the recipe handy – you’ll likely be getting plenty of requests for it.)

In a heavy hot skillet, toast the following ingredients for approximately 4 minutes. You want them to brown slightly and begin to release their aromas. But stop short of smoking!

Remove the seeds from the hot pan and allow to cool slightly. Grind in a spice grinder or using a mortar and pestle. My preference is to have a few whole seeds remaining, but you can grind them as finely as you like. Then add:

Mix well. Stored in an air-tight jar, it will keep for months.

Sprinkle a generous amount of spice rub over the flesh of the salmon and then pat it in place.  If you’re going to be using an oven, preheat it to 400°F. If using an outdoor gas grill, bring it up to the same temperature.