This is the bread traditionally made for Greek Easter, and much like the one our Yaya would bring to the table.

Yaya’s kitchen had a converted wood oven, marbled-linoleum floors, tall ceilings covered in tin tiles, and smelled like nothing you’ve likely ever breathed — but should have! I remember, as a young girl, standing in her kitchen, watching in utter fascination as she – wearing an apron over one of her always-black dresses –  would gently wrestle huge batches of dough, her stocky arms covered in flour, her hair wound in blonde-white braids around her head, her face serene. Four boys in that family, and they ate a lot of bread. And we did too, whenever we visited our Yaya and Papou.

I don’t have my yaya’s recipe for bread. But Yaya didn’t have or use recipes. How to make bread was in her body somewhere. She didn’t think it or measure carefully. She poured from glass bottles, scooped with bare hands, smelled and felt and knew when things were right.

This isn’t Yaya’s recipe, but it’s as close as I could come. It’s a brioche-type loaf – tender-crumbed, buttery, with a hint of anise and orange, absolutely delicious. The red egg is optional of course, but quite pretty nestled in its sesame-strewn, braided nest. If you decide to use one in yours, insert it between the twisted or braided ropes after it’s risen but before the egg-wash and sesame seeds have been added. You can insert the egg either uncooked or hard-boiled, but it’s typically not eaten after its baked with the bread.

In a separate post to follow tomorrow, I’ll be sharing a recipe for a – quick & easy – alternative to this loaf.  It’s a Challah that I’ve made for years using the food processor, but with slight variations for this occasion.)

the recipe can be doubled for 2 Tsourekia

Using a microplane zester if you have one, remove only the zest of ½ orange.  Finely chop the zest and add it to the warm water and olive oil in the bowl of your mixer. Add the warm milk and combine well with a whisk. (It’s important that the zest be very fine here so as to fully infuse the bread with delicate flavor, but no chunks of peel. If you don’t have a microplane, I recommend you put the first three ingredients in a blender first, then add them, along with warm milk, to the bowl of your mixer.)

In a separate bowl, combine the ½ cup flour,  1 T. sugar, the yeast and salt. Add slowly to the wet mixture of the previous step, whisking as you go, until all is well-combined. Set in a warm draft-free place to proof for 20 minutes.

Fit the stand mixer with paddle attachment and return the bowl to the mixer. Turn on low speed, and slowly add the flour. (Yaya knew the amount of flour is always variable in a bread recipe. It’s going to depend on how you measure both wet and dry ingredients, the humidity, the size of your eggs, etc. Last time I made this, it took nearly 3 cups, but if you add too much, your bread will be lacking in tenderness, which would be such a shame!  Add the final ½ cup gradually, as needed. You’ll want to add enough flour so that the dough pulls away from the sides of the bowl and starts to rise up on your beaters.The final dough should have the feel of a baby’s soft bottom. If that helps??  It’s really not tricky!)

Increase the speed of your mixer slightly and knead for 4 minutes until the dough becomes silky.  (If you don’t have a stand mixer you can do all of this by hand. Because there’s no whole-grain in this recipe, this is not a difficult one to knead – and there are times when kneading just feels so right!)  Take the dough and all its little bits from the bowl, form into a nice ball and return it back to the bowl to rise. Cover  and set in a warm place to double – about 40 minutes. (One nice environment is in your oven – no heat! – just fill another bowl with hot water and put it inside the oven along with your bowl of dough. Or you can rest it on a sunny ledge – if you live in one of those places where the sun shines!)

Turn the dough out onto a very lightly floured board. (Or if you like, you can lightly grease it instead.) Roll into a long rope with your hands. Pick up the two ends of  your ropes and set them down close to you. Now, just draw one end of the rope over the other, then under, then up over again. (All you’re really doing is making two complete twists.) Gently squeeze the ends together. 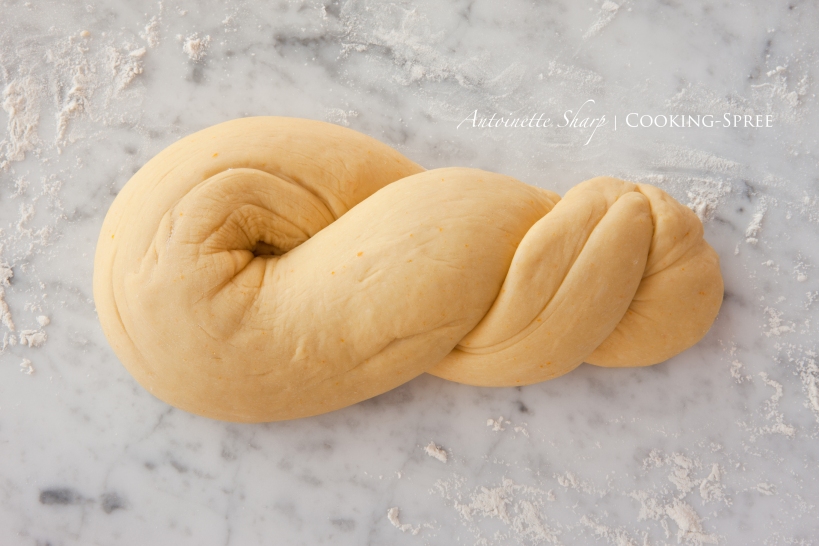 The halfway mark where you first folded the rope is where the egg will eventually nestle. But not yet. Place on a baking sheet lined with parchment paper. Cover and set in a warm place to double in size, another 40 minutes to an hour approximately.

Gently poke the egg down inside its spot, not too deeply though because the bread will continue to rise in the oven. About half way or a bit less will be good.

Brush the top of your loaf lightly and evenly all over with the egg wash and then sprinkle with sesame seeds. Put in the middle of the oven and bake until golden brown and cooked through, about 45 minutes. Take it from the oven and carefully remove it from the pan so it doesn’t break. Place it on a rack to cool.

For a printable copy of this recipe, click here.

I’ve adapted the recipe that appears in George and Chrisoula Papas delightful book,

Papas’ Traditional Greek Cooking! My thanks to them.