a bird in the hand…and hope

I had the feeling I was running behind in life…Do you ever? As if life were meant to progress by a schedule – like an efficiently-run German passenger train (which of course, we all know, it is not) and here I was, about to miss it.

Wasn’t it Lewis Carroll who said, “The hurrier I go, the behinder I get?” Was it the rabbit in Alice in Wonderland? Or was it me? Certainly it was me.

The other day I was feeling as though, no matter how long I might live, I could never catch up.

It might have made some sense had I asked, “But dear, exactly what is it you’re trying to catch up with or to?”  But of course, when you’re in “that mood” (meaning the complete absence of all good sense) you don’t ask such questions.

Sometimes though, in a life of grace (which is the life we all live, whether we know it or not) something happens. Something flies through the window to break the spell – the hex – we’re under, and set us right again.

The other day, I found myself in such a state of mind. And then…

Through the open doors of summer, a chartreuse vireo flew into our house. She was fluttering against the windows, seeing beyond them to the sky and trees, and trying desperately to find her way out again. Slowly I took my hand to her. To my surprise, she allowed me to lift her, fully enveloping her trembling tiny body between my two hands. She weighed little more than air. I walked with her back outside, then lifted my top hand. There she was, eyes wide. I expected her to fly. Straight away. But she didn’t.  Instead, she stayed.

She stayed and stayed as I walked with her, carrying her from place to place, in search of that spot where she might feel free again to fly.  Instead though, her tiny gray feet clutched tight to me as I spoke softly to her that it was safe to leave now. She closed her eyes and took long rests…opened her eyes and looked around…and then closed them again. Here she rested. And rested.

’twas perfect peace to me. 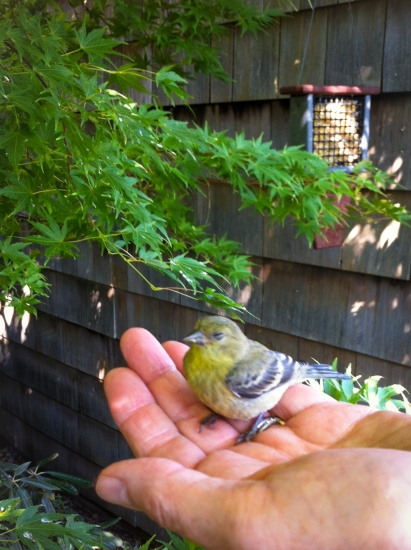 My husband and I watched, relieved as finally she flew, un-hurt.

And in that, All things were made right again.

There is a fellow-blogger I’ve grown especially fond of – Shira – her blog In Pursuit of More …Living with {just a little} Less will be so worth your time to check out, if you haven’t yet met her. She has a generous and gracious heart. She puts wonderful, healthful food on the table, and gives us words of wisdom to grow on.

Before leaving for a family trip to France recently, she was asked to say a few things about 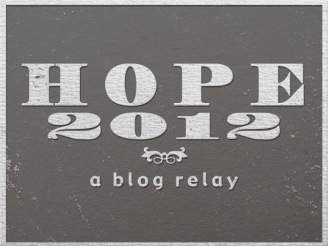 I think you’ll want to read what Shira had to say … (and, while you’re at it, would you please check out the fresh coconut pulp & chocolate torte with fresh raspberries spilling all over it? As if you could possibly miss such a thing!!)

Anyway, Shira asked several others to comment on the subject, and because it was she who asked, I couldn’t say no.

So…in my humble opinion…sometimes knowing precious little…here are a couple of my thoughts on HOPE … though in all honesty, the vireo pretty much told me what to write.

Hope is something seemingly unique to humans…for humans flit quite easily between past, present & future…seldom able to land any which place for long

Hope casts its eyes only on the future

For though Hope can be tenacious and fierce

As humans, where it comes to hope, our words and gestures matter. However small and insignificant we think they are, they have within them the power to lift another…to offer gentle rest and certain safety in times of need…to offer whispers or songs of encouragement…to hold firmly to the belief that we were all, each and every one, meant to fly.

we, little humble humans, can Hope,

In the interest of keeping the topic alive, and because this IS a relay, I’m passing the baton to a few others whose thoughts and perspectives I have so come to respect –  I hope they’ll share …

Ashley of Draw Near, Barb/Smidge of Just a Smidgen, Claire of Promenade Plantings, Kathryn of Kiwsparks, Chicago John from The Bartolini Kitchens and Sawsan of Chef in Disguise

I’ve tagged one more than “necessary” just in case one of them finds their time is too full for relays & races just now. Who among us wouldn’t understand that?

Tags: hope, writing
From: A Word or Two
← cedar plank salmon with spearmint sauce
on the farm →
39 Comments Post a comment