The Guinea Pig and I took a fast train south, from Paris to Provence. It was our first time in southern France and we  weren’t sure that we’d made the right choice on where to land…that is, until we arrived. Then we knew.  Saint-Rémy was just our speed.

Situated in the heart of the Alpilles,  Saint-Rémy is built on one of the oldest archeological sites in all of Europe. (The next travel post – I’ll share some amazing ruins virtually “next door” – inhabited by the Romans between the 6th century BCE and 3rd century AD.) The current town of St. Rémy is encircled by remnants of its original 14th century walls. Some of the buildings’ facades date to the Renaissance.

This town was the birthplace of the famous astrologer and physician Nostradamus.

(More recently, Van Gogh spent years here…but more about that in a moment.)

Saint-Rémy is filled with Renaissance facades, residences, convents and chapels. Its winding streets are cobbled and water drains down the center.

The sun shines hard here and the mistral winds blow fiercely when they do.

Pick a color, and then pastel it…or silk it…these are the colors Saint-Rémy wears.

Because the Guinea and I tend to eat our three squares no matter where we are, we’ve developed a nose for the aromas of good food rising from the stove and wafting out the windows. We found some of our favorite here… 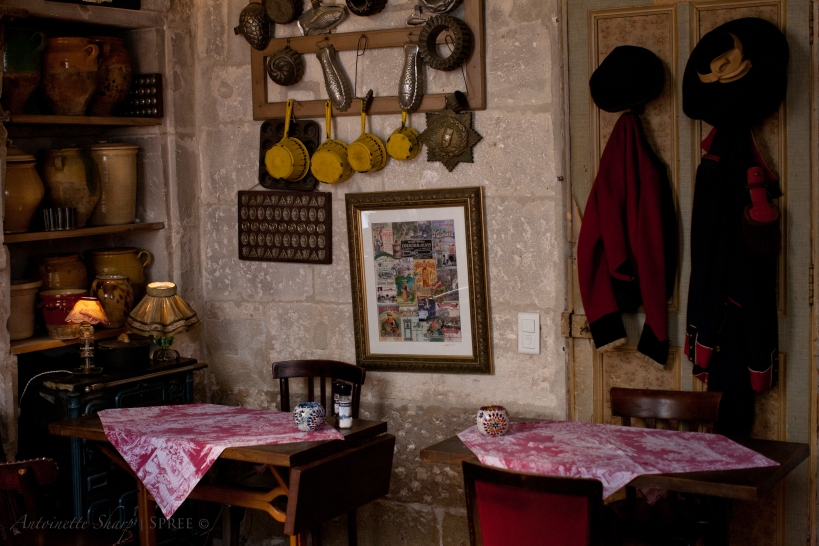 ‘Twas so good in fact, we found it twice…

We experienced a couple highlights during our stay in Saint-Rémy, apart from the food. One, the Roman ruins of Glanum I’ll share next time;

the other, so moving, was the Cloître Saint-Paul, and with it, the Asylum where Vincent Van Gogh was confined for a time. (1889-90)

Some of his most famous paintings were done during his stay here. (Among the many,  Starry Night and Self-Portrait.) When you walk the beautiful hushed grounds here, you’ll see where he set his easel and pulled out his brushes to paint. And you’ll see the magic that was Vincent’s mind. Vincent’s room, with its view onto the gardens…

I don’t know whether you can understand that one may make a poem only by arranging colors…In a similar manner the bizarre lines, purposely selected and multiplied, meandering all through the picture, may not present a literal image of the garden, but may present it to our minds as in a dream, depicting its character, and at the same time stranger than it is in reality.

from a letter van Gogh wrote to his sister Wilhelmina

Out the ancient weathered doors lie the rows of lavender and the beds of irises Vincent so loved.

They weren’t in bloom for us of course.  We were late. 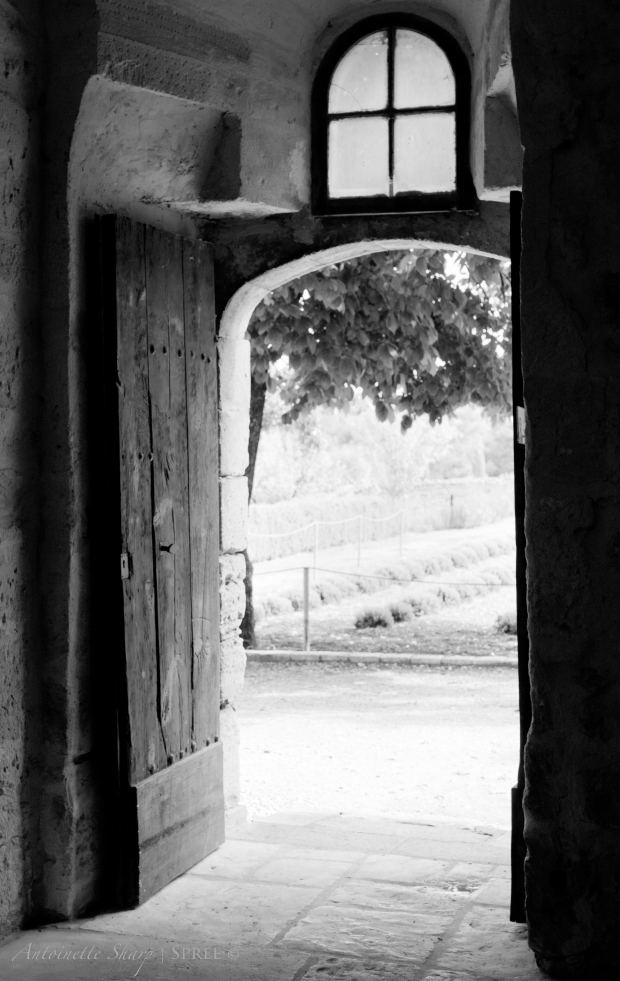 Walking these grounds, seeing the source of some of his most beautiful paintings, hearing his words, standing in his spare and solitary room…

Vincent’s spirit still permeates this place. The torment that was brought on him by his mental illness still lingers here. And yet, so too does some of the beauty that his dreaming mind and sky eyes saw.

A note on the work of the Cloître

and the Dreams of Provence

The facility that was once the residence of Vincent van Gogh still houses and treats the mentally ill. Lining the walls of the covered walkways that surround the cloister, you’ll see their art work…their paintings, their drawings. And you’ll also see photographs of these residents dressed in costume, their expressive faces comic or serious, laughing, embracing, playing the roles they have chosen…

Here is an explanation of this phenomenal on-going project…