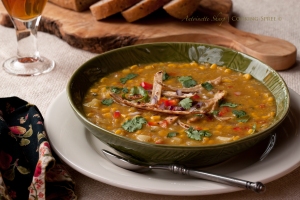 We woke in the dark, piled on layers of clothes and loaded cameras in the car. We gassed up and fearlessly set out in the sub-arctic temperatures of sunny Arizona, our hearts tilting toward Grand Canyon. Because it was dark and there was little else to look at, I became fascinated with the external temperature indicator on the dash. We left Sedona at 22°F. We climbed higher, through Oak Creek Canyon in the blue black frigid darkness and the temperature kept dropping. I couldn’t resist taking pictures of the numbers on the dash. 15°, 9°, 0°. Past Flagstaff, we changed directions, I think we were heading north, but I know we were heading colder. Somewhere up there on this wide white expanse, the temperature dropped to -15°. That’s 15°  below ZERO! I texted the proof back home.

I try not to get too terribly excited when my husband’s driving, but I was shrieking in my own head – I’d never been in a place this cold before, “I” was breaking records here! He (the rational one who considers our safety) thought of turning around and heading back. What if we stopped the car and it wouldn’t start again? Then where would we be? Me (the fool, who thrills to adventure) thought this was really cool! Happily, the fool prevailed – we drove on.

In another hour or so, we arrived. The brilliant sun shone. Long icicles dripped crystal drops. Blue-black ravens made their cracking sounds high in the branches above us. 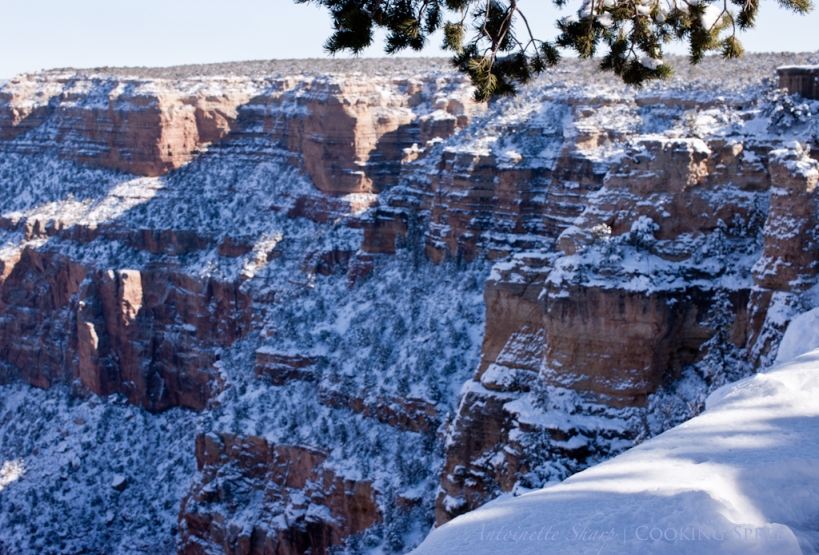 Bundled tight, we ran for the edge to see to the bottom. It was dizzying, glorious! 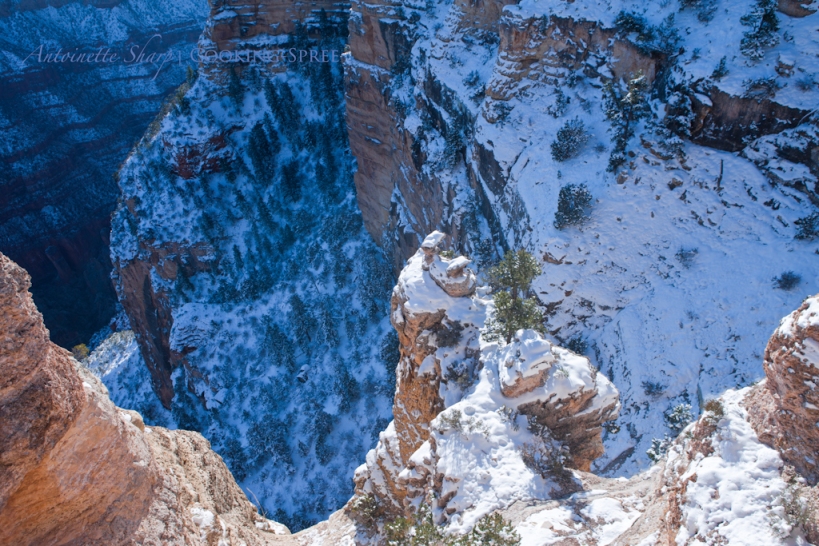 We snapped our dozens of photos including one of our own long shadows holding hands. Then we headed for the warmth of the lodge, with its rockers on the porch, its grand-scale stone fireplace, and the soup we remembered from the last time we were here. 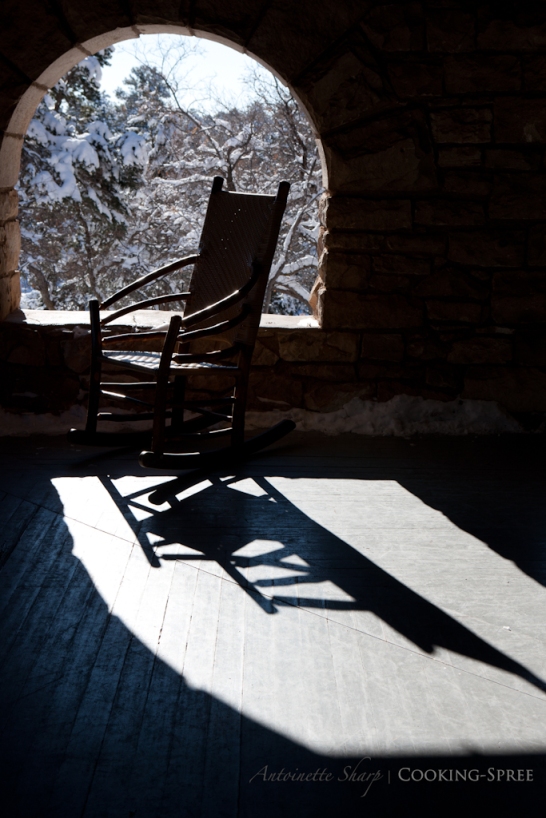 Last time, I’d even begged for the recipe for that soup. And they gave it to me!

We kept flipping the menu over, front to back, and back to front again, sure we’d missed the soup somehow. It wasn’t there.

We asked our server and were told that another restaurant in the canyon serves it regularly and that it only makes its way up to the big lodge on occasion. This was not to be such an occasion. There was no soup for us that day. 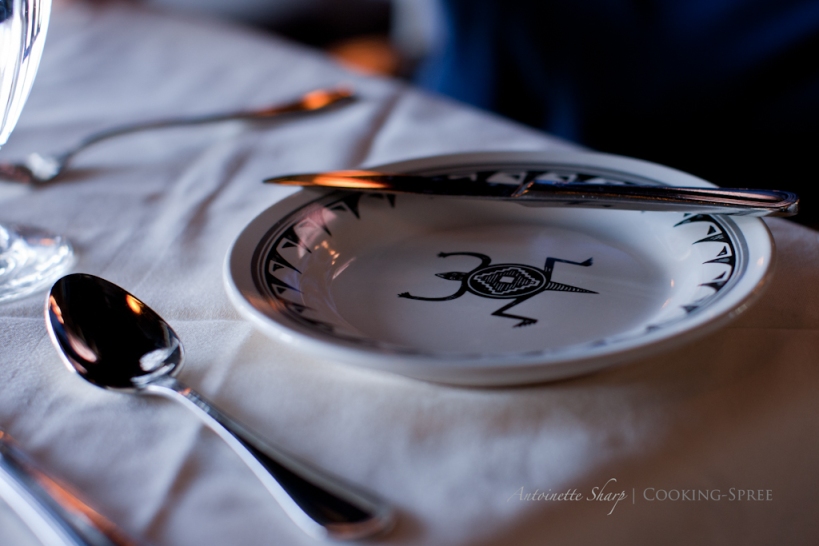 Did it dim our enthusiasm? Not one bit.

But with corn chowder still on my mind when we returned home, I had to make a pot. This pot though varies hugely from the one we’d eaten at the canyon. That one used a half gallon of cream. I kid you not. A half gallon! Granted it fed quite a few people, but there was just no way I could bring myself to do it.

I’m pointing no fingers, but I’ve noticed we’re all eating quite well this time of year. Sneaking cookies and egg nog, seconds on gravy and mashed potatoes. But here’s an offering that’s very low fat, creamy with no cream, sweet with no sugar, colorful with no candied sprinkles. What’s more, it’s inexpensive and easy to prepare.  Here’s how:

1½ teaspoon salt (plus more to taste) 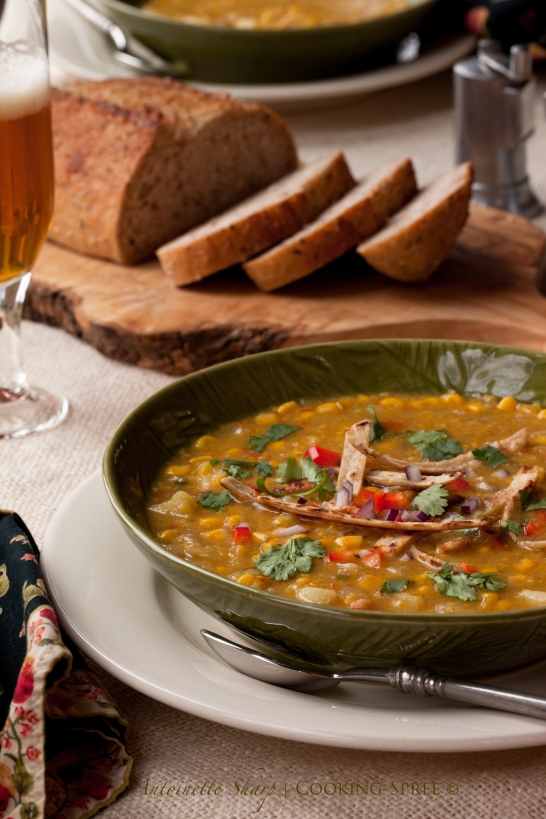 Roast the cumin seed in a dry skillet, medium-low heat until its begun to brown and its aroma is rising. Grind using a mortar and pestle or a spice grinder. (Alternately use ground cumin. But the flavor of toasted cumin is wonderful and worth the extra step.)

In a large skillet, over medium-low heat, heat the olive oil to shimmering. Add the chopped onion, minced garlic, and diced jalapeno pepper. Cook, stirring occasionally until onion has softened. (About 10 minutes.) Add the salt, cumin and cayenne. Cook for about 30 to 45 seconds, stirring continually. Add stock of your choice and liquid smoke.

Add the sweet potato. Bring to a boil, lower heat and simmer for about 15 minutes.

Add the corn and red pepper. Return pot to a simmer. Continue cooking for 5 minutes.

Remove 5 or 6 cups of the soup (roughly half) and place in a blender. Allow to cool slightly. With a folded towel over the lid, purée, then add back into the soup. Return pot to simmer and cook another 5 minutes. Taste and correct seasonings. You may want a touch more smoke, or more salt, or extra cayenne heat.

Ladle into bowls and garnish liberally.

(My personal preference is to allow this soup to sit, off the heat for an hour or more and then reheat when it’s time to serve. The flavors get even better over time, as is the case with most soups. But if you’re not able to do this, proceed & enjoy!) 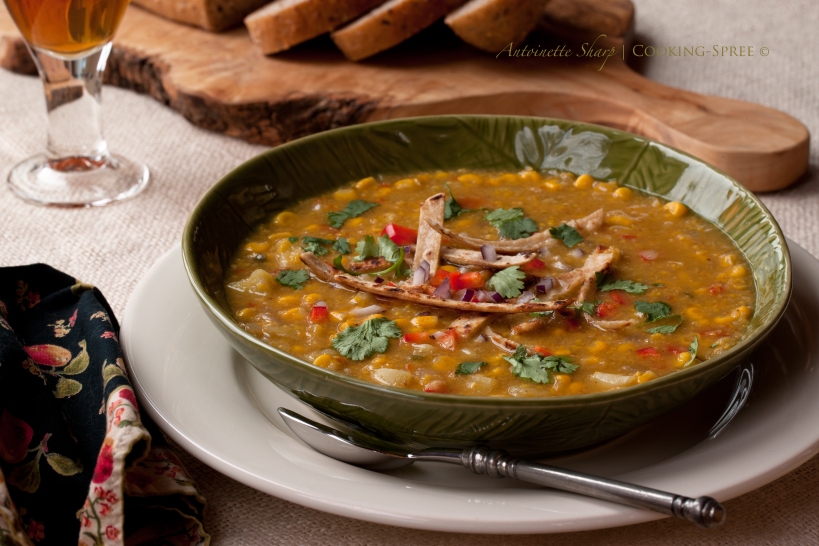